Actress and author Sasha Pieterse shared this important advice during myPCOSteam’s live Q&A on May 6, 2021, where members of the polycystic ovary syndrome (PCOS) community had a chance to ask questions about living with the disease.

Pieterse and PCOS Awareness Association founder Megan Pearson joined myPCOSteam co-founder Mary Ray to answer members’ questions about how to manage a chronic condition, the impact of PCOS on their lives, and how to talk to family members about the diagnosis.

Here are some of the things Pieterse and Pearson discussed during the live Q&A:

Check out the video to see the entire one-hour event, and register to be notified about future upcoming live Q&A sessions on myPCOSteam.

Disclaimer: The information, including but not limited to, information from presenters, text, graphics, images, and other material shared during this event is for informational purposes only. The information is not intended to be a substitute for professional medical advice, diagnosis, or treatment. Always seek the advice of your physician or other qualified health care provider with any questions you have regarding a medical condition. Never disregard professional medical advice or delay in seeking it because of something you heard during this event. Beyond her successful acting career, Pieterse extends her talents through lifestyle. In 2019, she added cookbook author to her oeuvre, with Dey Street Books publishing “Sasha in Good Taste” on October 8, 2019. This book is an extension of her same-named website, YouTube series, and social pages offering “yummy food & drinks, home decor, design tips & tricks.”

Pieterse began her career in 2002 at the age of six, winning a Young Artist Award for her role as Buffy on the WB comedy series “Family Affair,” starring with Gary Cole and Tim Curry on the remake of the late-1960s television hit. She later reunited with Cole as his daughter in the cable thriller “Wanted,” and extended her telefilm repertoire with the Hallmark drama thriller “Claire,” opposite Valerie Bertinelli, and the Disney Channel Original Movie “Geek Charming.” She portrayed a young gypsy girl with fire powers in a recurring role on the hit NBC series “Heroes.” Pieterse earned a Daytime Emmy nomination for her guest turn on “House, M.D.,” as a terminal cancer patient terrified of dying without ever being kissed. She also had guest starring roles on “Without a Trace,” “Stargate SG-1,” “Medium,” “Hawaii Five-0” and “CSI: Miami.”

On the big screen, Pieterse’s first film role was as the Ice Princess in Robert Rodriguez’s 2005 adventure “The Adventures of Sharkboy and Lavagirl 3-D,” followed by the crime drama “The Air I Breathe,” the comedy romance “Good Luck Chuck,” the 20th Century Fox blockbuster “X-Men: First Class,” and the teen comedy “G.B.F.” Winning the ensemble Robert Altman Award at the Film Independent Spirit Awards, Pieterse and co-stars Reese Witherspoon, Joaquin Phoenix, and Martin Short earned kudos for Paul Thomas Anderson’s “Inherent Vice,” with Pieterse as a runaway teen who Doc (Phoenix) recollects as one of his first cases. More recently she starred with Virginia Madsen and Kaley Cuoco in “Burning Bodhi,” in the adaptation of the young-adult novel “Coin Heist,” and in the 2018 ensemble drama “The Honor List.”

Pieterse was born in Johannesburg, South Africa, and emigrated to America as a preschooler, landing in Las Vegas with her show-business parents before the family moved to Los Angeles. She became accustomed to the rigors of a career in entertainment at an early age, as her parents were a professional acrobatic dance team who performed worldwide. Along with acting, her early career included extensive modeling and commercial work.

Pieterse is married to her childhood friend, producer/writer Hudson Sheaffer, and is the proud owner of two Great Danes, Lady and Levi. Megan M. Pearson was born in Boston, raised in Seattle, and has resided in Virginia the last few years. While in Seattle, Megan worked for the Boeing Company for nine years as an executive assistant. Over the last four years, she has worked for Capital One and is the executive assistant to the chief model risk officer and chief operational risk officer. She holds a bachelor’s degree in business administration with a focus in project management from City University of Seattle.

Since a young age, Megan’s passion has always been to help others. When faced with personal adversity, she turned it into an opportunity to make a difference in others’ lives. She is the proud founder and executive director of PCOS Awareness Association, the world's largest nonprofit organization dedicated to polycystic ovarian syndrome. Megan’s mission is to revolutionize the way people approach education surrounding PCOS awareness. Most importantly, she is extremely dedicated to fighting for women with PCOS.

While working on increasing the reach of PCOS Awareness Association and those it supports, Megan has written the foreword for the Amazon bestselling book “PCOS Diet for the Newly Diagnosed.” She was awarded Seattle’s Be Bold Be You Woman of the Year award for her community engagement and advocacy for people with polycystic ovarian syndrome. She has been featured in and has written numerous articles for publications worldwide, including Marie Claire, Women’s Health, The New York Times, and Los Angeles Times. She has planned, organized, and hosted several events in the name of PCOS.

When she is not focused on her career and volunteer work, Megan enjoys taking classes on topics of interest, networking, and discovering new places. In January 2020, she married the most supportive and uplifting man, not only adding a husband to her life but two children. Megan looks forward to the new adventures with her family. 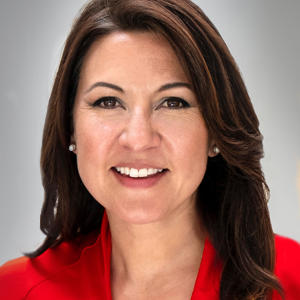 Mary Ray, co-founder and COO of MyHealthTeams, has a deep understanding of consumer behavior and social networking, which has made the company’s mobile and web apps a daily habit for millions facing a chronic health condition. Her innovative vision for digital health solutions has transformed the way people connect with others who share their diagnosis, facilitating unfiltered conversation and accelerating access to trusted information. Recognized for building scalable platforms that drive consumer engagement, Mary was honored as a DTC Innovator and a PM360 ELITE in 2019. She has contributed to Forbes and been quoted in industry publications at the intersection of health and technology. She has spoken at conferences including the DTC Forum on Social Media and Technology, Health Datapalooza and Digital Pharma. Mary is an advocate for women in technology and has served as a SXSW mentor and a speaker at the Stanford Graduate School of Business. She is a graduate of the College of William & Mary School of Business and George Mason University.

You're in! Thanks for subscribing!

Easily manage your subscription from the emails themselves.

If you’re living with polycystic ovary syndrome (PCOS), you’re already aware of the impact the...

To determine how you can reduce your medical expenses, myPCOSteam sat down with Susan Null of...

To determine how you can reduce your medical expenses, myPCOSteam sat down with Susan Null of...
read article >

Because the physical impact of polycystic ovary syndrome (PCOS) can be all-consuming, you may be...

Because the physical impact of polycystic ovary syndrome (PCOS) can be all-consuming, you may be...
read article >

To sign up for the next live Q&A and watch past Q&A videos, go to (and bookmark)...

To sign up for the next live Q&A and watch past Q&A videos, go to (and bookmark)...
read article >

Four Books About PCOS You Should Read

Thousands of members of myPCOSteam connect with one another and read each other's stories to gain...

Four Books About PCOS You Should Read

Thousands of members of myPCOSteam connect with one another and read each other's stories to gain...
read article >

Canceling Is Kindness: Keeping Safe From COVID-19 With PCOS

Those of us living with pre-existing, chronic illnesses such as PCOS have likely felt the impact...

Canceling Is Kindness: Keeping Safe From COVID-19 With PCOS

Those of us living with pre-existing, chronic illnesses such as PCOS have likely felt the impact...
read article >

Eat healthier. Exercise more. Learn a new skill. Pay off a credit card. Many of us have made...

Eat healthier. Exercise more. Learn a new skill. Pay off a credit card. Many of us have made...
read article >

This time of the year can be overwhelming with expectations around the holidays, and living with...

This time of the year can be overwhelming with expectations around the holidays, and living with...
read article >

Insomnia and Sleeplessness with PCOS

Do you have trouble sleeping at night? You’re not alone. Members of myPCOSteam say frequent...

Insomnia and Sleeplessness with PCOS

Do you have trouble sleeping at night? You’re not alone. Members of myPCOSteam say frequent...
read article >

Hair loss can be an emotionally difficult symptom of polycystic ovary syndrome (PCOS) – and a hot...

Hair loss can be an emotionally difficult symptom of polycystic ovary syndrome (PCOS) – and a hot...
read article >

Thank you for signing up.

close
ABOUT PCOS TYPES DIAGNOSIS CAUSES SYMPTOMS TREATMENTS RESOURCES
New to myPCOSteam? Learn More
Quick Links
Q+A Treatments A-Z Resources Are you a provider? Crisis
About Us
What is myPCOSteam? Partner with us Terms of service Press/News Privacy policy Cookie policy
Help With This Site
Getting started FAQ Community guidelines Contact us Accessibility

Get the myPCOSteam mobile app

© 2021 MyHealthTeams. All rights reserved.
myPCOSteam is not a medical referral site and does not recommend or endorse any particular Provider or medical treatment.
No information on myPCOSteam should be construed as medical and/or health advice.